Everybody is talking about it: 'women's rights to take centre stage in 2020' 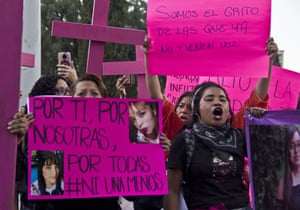 World leaders, civil society and the private sector are preparing to make 2020 the biggest year yet for the advancement of women’s rights.

Over the course of the year, thousands of people are expected to attend high-level UN events and forums in Mexico City and Paris to mark the 25th anniversary of the Beijing platform for action, a landmark agreement to end gender inequality.

More than 160 countries have already submitted reports outlining the progress made and the obstacles faced in achieving the Beijing agreement. In January, the UN secretary general is expected to publish an assessment of global efforts, and member states are already negotiating ways to accelerate action.

Global gatherings for gender equality, convened by UN Women – which has launched its own Generation Equality campaign – and co-hosted by the governments of Mexico and France, will be held in May and July. Governments, women’s rights activists and businesses are expected to form coalitions to agree fully-funded action plans on abortion rights, ending violence and other specific issues.

“2020 is going to be massive, and the potential [for change] is enormous,” said Katja Iversen, president and CEO of Women Deliver, a global advocacy group for women’s rights. “Everybody is talking about it. A lot of people are talking about how to get in on the act.”

Iversen cautioned, however, that the year “has to end in strong action”. “We can’t have empty commitments again. We need big, bold, accountable commitments and action. If that doesn’t happen after this year, we will all lose tremendously.”

The Beijing platform for action was adopted unanimously by 189 governments at the UN’s fourth world conference on women, held in China in 1995. It is considered the most progressive international blueprint for advancing women’s rights.

It covered 12 key areas. These included eliminating violence against women, ensuring all women have access to family planning and the reproductive healthcare they need, removing barriers to women’s participation in decision-making, and providing decent jobs and equal pay for equal work. The declaration urged governments to assess the impact of environmental degradation on women, and called for indigenous women to be given an equal say in sustainable development. It also recognised the disproportionate burden of unpaid care that falls on women and called for a better portrayal and representation of women in the media.

A quarter of a century on, however, no country has achieved gender equality, and the Beijing agenda is being undermined by growing conservative populist movements that seek to roll back women’s rights. The Trump administration has taken a leading role in the pushback.

There has been some progress but, globally, one in three women are still expected to experience sexual or physical violence in their lifetime, women are paid less than men for doing the same work, and they continue to bear a disproportionate burden of unpaid care work. Hundreds of thousands of women still die each year from complications in pregnancy and childbirth, and less than a quarter of MPs are women.

Françoise Girard, president of the International Women’s Health Coalition, said 2020 is a “key moment to gather and push [the Beijing agenda] forward”.

“We are very engaged in the Beijing+25 anniversary work. It’s a moment where governments are going to negotiate a new agenda,” she said.

As well as fighting for “issues that remain difficult”, such as abortion rights, body autonomy and sexual orientation, Girard said the anniversary offered a chance to push for action on issues “that have really developed since Beijing”. These include the impact of the climate crisis on women, targeted support for female refugees, and the impact of sexual violence at work on women’s economic participation. “We’re now understanding the impact that has had in keeping women back in the workplace”, said Girard.

She added that activists will be calling on governments to afford greater protection to female human rights defenders, and to take more seriously online harassment and mental health issues.

“There’s lots [of areas] that we have come to understand in the past 25 years that were mentioned in Beijing but not all were developed. We’re eager to bring these to the fore.”

As well as the Beijing anniversary, next year will mark two decades since UN security council resolution 1325 first acknowledged women’s unique experience of conflict and their lack of involvement in peace negotiations. Nine subsequent resolutions have been passed. Anniversary events are being planned for October and activists will be steeling themselves for the introduction of any new resolution. In April, heavy lobbying by the US resulted in the removal of key language around sexual and reproductive health and rights from a resolution introduced by Germany.

Next year also kicks off the 10-year countdown to achieve the UN sustainable development goals, which includes a commitment to end gender inequality by 2030.

“These are all extremely important to advance women’s rights,” said Dinah Musindarwezo, director of policy and communications at Womankind Worldwide, a global organisation supporting women’s rights groups in Africa and Asia.

She said she hoped 2020 would mark the coming together of feminist groups to create a strong, global movement for change.

“It’s a crucial year because we see it as a year where we can come together and accelerate the promotion of women’s rights and gender equality,” said Musindarwezo.

“Twenty-five years is a long time to wait to achieve the commitments our governments have made,” she added. “We can’t wait another 25 years.”