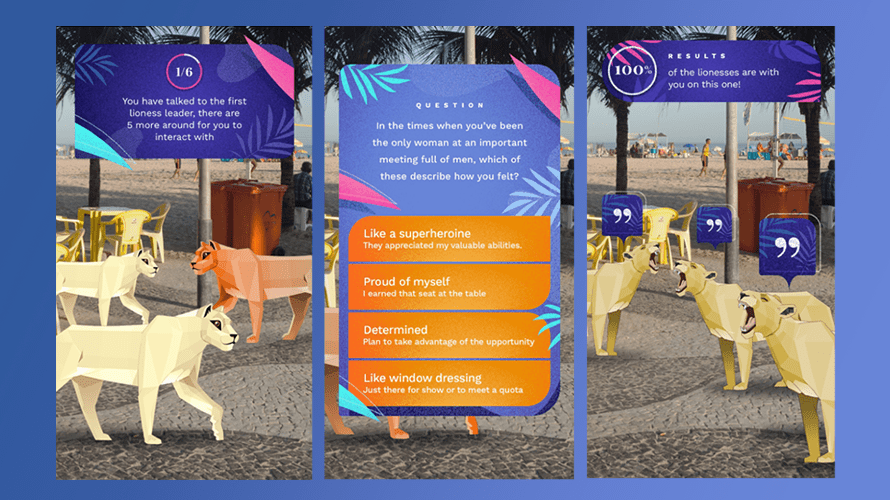 The Lioness app aims to leverage the stories and experiences of female advertising professionals worldwide.
Ogilvy

Ogilvy, Google and the UN Women’s Unstereotype Alliance have joined forces to show how technology can be used to unite advertising’s female professionals worldwide, with the hopes that it will then empower them in their careers and drive change across the industry.

The WPP creative agency and tech behemoth partnered to create the aptly named Lioness app, which will use various Google tools to leverage the voices of women at agencies globally and immerse them in one another’s experiences.

The app was originally slated for a June release to coincide with this year’s Cannes Lions International Festival of Creativity. Ogilvy and Google discussed their use of technologies like augmented reality in creative at a Cannes panel.

The Lioness is now expected to launch sometime in the fall.

What the app will offer is access to the critical female perspective in the male-dominated advertising space through Google tools such as the Tour Creator. That feature will allow users to tap into an “immersive 360” mockup of the daily lives of agency women, with a look into their offices, professional duties and the triumphs and tribulations they endured throughout their careers, according to Ogilvy’s Angela Fung, executive director, digital production.

Fung told Adweek that the aim of the project is to break down the isolation reported by so many women in advertising—a sensation which too often pushes them out of the industry altogether.

“We think these are stories that need to be told and given a platform,” Fung said. “A product like Tour Creator can create a visual workplace field trip. It can inspire students who wouldn’t have access to these female leaders otherwise.”

She noted that the project seeks input from female professionals at the associate level up to the C-suite. However, it is especially critical for ad women just starting out to hear from senior executives, when they often “had no idea” that these executives went through experiences so similar to their own.

“A lot of experiences in the marketing industry are actually really common,” Fung said, but there’s currently no network to highlight them. Google’s many tools and tech solutions have provided “a real playground of possibilities,” she added.

So far, 35 women have joined the Lioness network, including Tea Uglow, creative director at Google Creative Lab, who confesses to her own lack of confidence in the story she contributed to the app; Ogilvy’s Ee Rong Chong, Singapore group managing director; and Patou Nuytemans, CEO of MENA and chief digital officer of EMEA. The latter two leaders both discuss the importance of bringing emotions to the creative table.

“We hope this initial set of lionesses will just be the beginning of a series where we’re able to bring the experiences of women in the marketing industry to life,” Fung said.

The above video provides a behind-the-scenes view of how the app came to life. Ogilvy associate creative directors Terin Izil and Abigail Harris-Shea came up with the idea after working on a separate AR project for Google.

“I am very honored to be a part of this movement,” Abigail Posner, Google’s head of strategy, brand unit, said in a statement. “It connects so many diverse women’s voices together and brings these amazing women’s stories of achievement, perseverance and strength—many unknown until now—to life.”

Posner continued, “Bringing awareness to these women and their experiences is so critical because they serve as sources of encouragement, hope and camaraderie for younger women in our creative industry … something I wish I could have had to inspire me when I was younger. At Google, we believe programs like this can play an important role in advancement of our industry.”

After hitting Hollywood last year, the #MeToo movement has worked its way through various industries including advertising, while shedding light on gender discrimination, pay disparities and harassment in the workplace. Tech is a space historically known as a hotbed for those issues, and Google itself has faced recent lawsuits from female employees who claim to have faced systematic discrimination.

“We are very excited that Google is launching this movement to help advance the Unstereotype Alliance’s objectives,” Jennifer Cooper, UN Women coordinator of the Unstereotype Alliance, added in a statement. “The objectives of the Alliance focus on increasing diversity in the advertising industry, as well as producing progressive content that is free from harmful stereotypes. Using technology, we can reach an audience in a more innovative way in order to explore the daily realities of women in the creative industry in particular.”

Fung, who had anticipated “a lot of gracious declines,” said Google and all of the women who were asked to participate embraced the project, making it “an incredibly warm and giving experience.”

“Ironically, Google’s technology allowed us to really leave a lot of human fingerprints on the work,” Fung said. “It’s this network of support that helps us get where we want to go.”